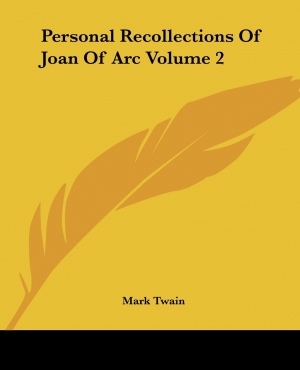 Personal Recollections of Joan of Arc, by the Sieur Louis de Conte is an 1896 novel by Mark Twain about Joan of Arc. It was Twain's last completed novel.

The novel is presented as a translation (by "Jean Francois Alden") of memoirs by Louis de Conte. The novel describes itself as Freely Translated out of the Ancient French into Modern English from the Original Unpublished Manuscript in the National Archives of France. "Louis de Conte" is a fictionalized version of that of Joan of Arc's page, Louis de Contes. de Conte is presented as an individual who was with Joan during the three major phases of her life-as a youth in Domrémy, as the commander of the army of Charles VII of France, and as a defendant at her trial in Rouen.

Personal Recollections of Joan of Arc was Twain's last completed novel. It was inspired by a lifelong fascination Twain had with Joan of Arc. Twain spent fourteen years on the novel and considered it his best work. The book was fairly well-received at the time of publication, though critics since then have generally dismissed it as overly sentimental.

The novel, like nearly all of Twain's writings, is in the public domain. The book has been published by Ignatius Press since 1989; this version of the book contains an additional essay by Twain entitled "Saint Joan of Arc".

To Be Read at Dusk