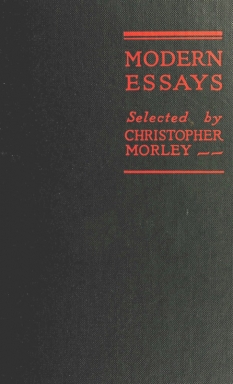 Modern Essays is thirty-three epitomal English and American personal essays chosen by Christopher Morley - a novelist who conceived the reader of his anthology as “a friend spending the evening in happy gossip along the shelves.” 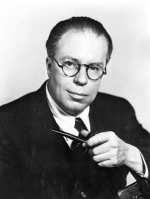 Christopher Morley (5 May 1890 – 28 March 1957) was an American journalist, novelist, essayist and poet. He also produced stage productions for a few years and gave college lectures.

Morley began writing while still in college. He edited The Haverfordian and contributed articles to that college publication. He provided scripts for and acted in the college's drama program. He played on the cricket and soccer teams.

In Oxford a volume of his poems, The Eighth Sin (1912), was published. After graduating from Oxford, Morley began his literary career at Doubleday, working as publicist and publisher's reader. In 1917 he got his start as an editor for Ladies' Home Journal (1917–1918), then as a newspaper reporter and newspaper columnist in Philadelphia for the Philadelphia Evening Public Ledger.

In 1920 Morley returned to New York City to write a column (The Bowling Green) for the New York Evening Post.