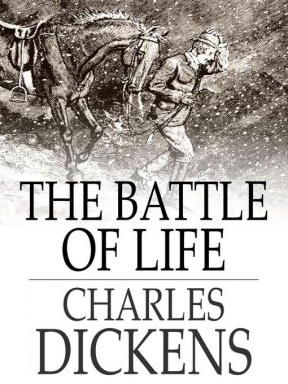 The Battle of Life: A Love Story is a novella by Charles Dickens, first published in 1846. It is the fourth of his five "Christmas Books", coming after The Cricket on the Hearth and followed by The Haunted Man and the Ghost's Bargain.

The setting is an English village that stands on the site of an historic battle. Some characters refer to the battle as a metaphor for the struggles of life, hence the title.

Battle is the only one of the five Christmas Books that has no supernatural or explicitly religious elements. (One scene takes place at Christmas time, but it is not the final scene.) The story bears some resemblance to The Cricket on the Hearth in two respects: it has a non-urban setting, and it is resolved with a romantic twist. It is even less of a social novel than is Cricket. As is typical with Dickens, the ending is a happy one.

It is one of Dickens's lesser-known works and has never attained any high level of popularity – a trait it shares among the Christmas Books with The Haunted Man.

Two sisters, Grace and Marion, live happily in an English village with their two servants, Clemency Newcome and Ben Britain, and their good-natured widower father Dr Jeddler. Dr Jeddler is a man whose philosophy is to treat life as a farce. Marion, the younger sister, is betrothed to Albert Heathfield, Jeddler's ward who is leaving the village to complete his studies. He entrusts Marion to Grace's care and makes a promise to return to win Marion's hand.

Michael Warden, a libertine who is about to leave the country, is thought by the barristers Snitchey and Craggs to be about to seduce the younger sister into an elopement. Clemency spies Marion one night in her clandestine rendezvous with Warden. On the day that Albert is to return, however, it is discovered that Marion has run off. Her supposed elopement causes much grief to both her father and her sister.