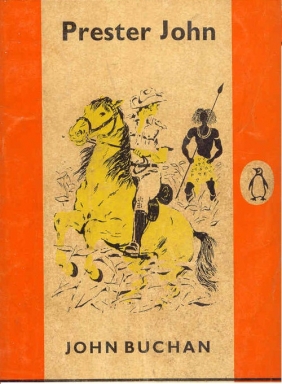 Prester John is a 1910 adventure novel by John Buchan. It tells the story of a young Scotsman named David Crawfurd and his adventures in South Africa, where a Zulu uprising is tied to the medieval legend of Prester John. Crawfurd is similar in many ways to Buchan's later character, Richard Hannay.

It contains the notable line: "Perfect love casteth out fear, the Bible says; but, to speak it reverently, so does perfect hate."

The setting is contemporaneous with publication: the beginning of the twentieth century. Crawfurd grows up in Kirkcaple, by the North Sea, where he first encounters the antagonist, Laputa, performing a ritual on the beach. Crawfurd's father dies, and he goes to work as a shopkeeper in a place called Blaauwildebeestefontein.

Crawfurd comes into contact with a Portuguese man, Henriques, and again with Laputa, and he gradually learns of illegal diamond smuggling and of a planned rising of the native people of the region, including the Zulu people and the Swazi people, led by Laputa. Laputa's skill as a preacher allows him to inspire many tribes across the region to follow him, and he invokes the legend of Prester John and positions himself as the rightful heir and leader who can rise up against colonial rule. Crawfurd learns more about this after meeting Captain Arcoll, who leads the colonialist army and police...