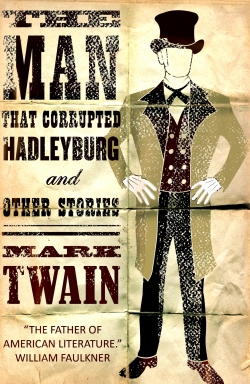 The Mysterious Stranger, and Other Stories

Life's Handicap: Being Stories of Mine Own People

The Man That Corrupted Hadleyburg is a piece of short fiction by Mark Twain. It first appeared in Harper's Monthly in December 1899, and was subsequently published by Harper & Brothers in the collection The Man That Corrupted Hadleyburg and Other Stories and Sketches (1900). Twain actually encouraged it to be read as a replay of the Garden of Eden story in a satiric sense.

Hadleyburg enjoys the reputation of being an "incorruptible" town known for its responsible, honest people that are trained to avoidtemptation. However, at some point the people of Hadleyburg manage to offend a passing stranger, and he vows to get his revenge by corrupting the town.

The stranger's plan centers around a sack of gold (worth around $40,000) he drops off in Hadleyburg at the house of Mr. and Mrs. Richards, to be given to a man in the town who purportedly gave him some life-changing advice (and 20 dollars in a time of need) long ago. To identify the man, a letter with the sack suggests that anyone who claims to know what the advice was should write the remark down and submit it to Reverend Burgess, who will open the sack at a public meeting and find the actual remark inside. News of the mysterious sack of gold spreads throughout the town and even gains attention across the country.

The Book Of The Thousand Nights And A Night — Volume 10

Mosses from the old manse

The Book Of The Thousand Nights And A Night — Volume 09

On Picket Duty, And Other Tales

The Phantom 'Rickshaw, and Other Ghost Stories