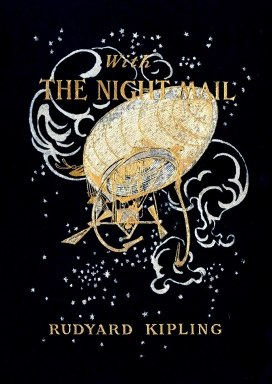 Having achieved international fame with The Jungle Book, Captains Courageous, Kim, and his Just So Stories, in 1905 Kipling serialized a thrilling science fiction novella, With the Night Mail: A Story of 2000 A.D, in which the reader learns-while following the exploits of an intercontinental mail dirigible battling foul weather-about a planet-wide Aerial Board of Control, which enforces a rigid system of command and control not only in the skies (which are increasingly crowded with every manner of zeppelin) but in world affairs too.

Kipling got so excited by his own utopian vision that when the story first appeared in McClure's Magazine, it was accompanied by phony advertisements for dirigible and aeronautical products that he'd written, plus other ersatz magazine clippings. In one of these latter, we read that the Aerial Board of Control had effectively outlawed war in 1967-by "reserving to every nation the right of waging war so long as it does not interfere with traffic and all that that implies."

This turns out to imply a great deal! In Kipling's 1912 followup story, "As Easy As A.B.C.," which is set 65 years after With the Night Mail, we learn just how complete the Aerial Board's control is over the social and economic affairs of every nation. When a mob of disgruntled "Serviles" in the District of Northern Illinois demands the return of democracy, the A.B.C. sends a team of troubleshooters (from England, Russia, Japan, and Italy) and a fleet of 200 zeppelins to "take such steps as might be necessary for the resumption of traffic and all that that implies." Democracy, it seems, is an impediment to the smooth flow of international commerce-so it was abolished during the 20th century, along with newspapers.

What happens when the A.B.C. troubleshooters confront the democrats? Trouble!