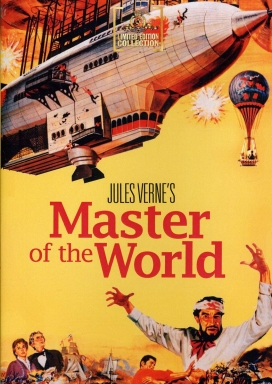 Master of the World (French: Maître du monde), published in 1904, is one of the last novels by French pioneer science fiction writer, Jules Verne, and is a sequel to Robur the Conqueror. At the time Verne wrote the novel, his health was failing, and Master of the World is a "black novel," filled with the fear of the coming of tyrants like the novel's villain, Robur, and totalitarianism.

A series of unexplained happenings occur across the eastern United States, caused by objects moving with such great speed that they are nearly invisible. The first-person narrator John Strock, 'Head inspector in the federal police department' in Washington, DC, travels to the Blue Ridge Mountains of North Carolina to investigate and discovers that all the phenomena are being caused by Robur, a brilliant inventor who had previously appeared in Verne's Robur the Conqueror.

Robur had perfected a new invention, which he has dubbed the Terror. This is a ten-meter long vehicle, that is alternatelyspeedboat, submarine, automobile, or aircraft. It can travel at the (then) unheard of speed of 150 miles per hour on land and at over 200 mph when flying.