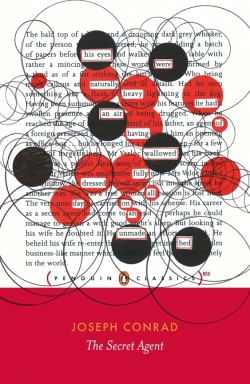 The Secret Agent: A Simple Tale is a novel by Joseph Conrad published in 1907. The story is set in London in 1886 and deals largely with the life of Mr. Verloc and his job as a spy. The Secret Agent is also notable as it is one of Conrad's later political novels, which move away from his typical tales of seafaring. The novel deals broadly with the notions of anarchism, espionage, and terrorism. It portrays anarchist or revolutionary groups before many of the social uprisings of the twentieth century. However, it also deals with exploitation, particularly with regard to Verloc's relationship with his brother-in-law Stevie.

The novel is set in London in 1886 and follows the life of Mr. Verloc, a secret agent. Verloc is also a businessman who owns a shop which sells pornographic material, contraceptives, and bric-a-brac. He lives with his wife Winnie, his mother-in-law, and his brother-in-law, Stevie. Stevie has a mental disability, possibly autism, which causes him to be very excitable; his sister, Verloc's wife, attends to him, treating him more as a son than as a brother. Verloc's friends are a group of anarchists of which Comrade Ossipon, Michaelis, and "The Professor" are the most prominent. Although largely ineffectual as terrorists, their actions are known to the police. The group produce anarchist literature in the form of pamphlets entitled F.P., an acronym for The Future of the Proletariat.

The novel begins in Verloc's home, as he and his wife discuss the trivialities of everyday life, which introduces the reader to Verloc's family. Soon after, Verloc leaves to meet Mr. Vladimir, the new First Secretary in the embassy of a foreign country. Although a member of an anarchist cell, Verloc is also secretly employed by the Embassy as an agent provocateur. Vladimir informs Verloc that from reviewing his service history he is far from an exemplary model of a secret agent and, to redeem himself, must carry out an operation – the destruction of Greenwich Observatory by a bomb explosion. Vladimir explains that Britain's lax attitude to anarchism endangers his own country, and he reasons that an attack on 'science', which he claims is the current vogue amongst the public, will provide the necessary outrage for suppression. Verloc later meets with his friends, who discuss politics and law, and the notion of a communist revolution. Unbeknownst to the group, Stevie, Verloc's brother-in-law, overhears the conversation, which greatly disturbs him.