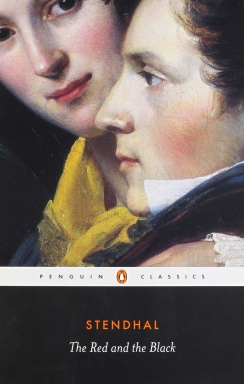 Le Rouge et le Noir (French pronunciation: ​[ləʁuʒ e lə nwaʁ]; French for The Red and the Black) is a historical psychological novel in two volumes by Stendhal, published in 1830. It chronicles the attempts of a provincial young man to rise socially beyond his modest upbringing through a combination of talent, hard work, deception, and hypocrisy—yet who ultimately allows his passions to betray him.

The novel’s full title, Le Rouge et le Noir: Chronique du XIXe siècle (The Red and the Black: A Chronicle of the 19th Century), indicates its two-fold literary purpose as both a psychological portrait of the romantic protagonist, Julien Sorel, and an analytic, sociological satire of the French social order under the Bourbon Restoration (1814–30). In English, Le Rouge et le Noir is variously translated as Red and Black, Scarlet and Black, and The Red and the Black, without the sub-title.

The title refers to the tension between the clerical and secular interests of the protagonist, which is a matter of some debate.

Le Rouge et le Noir is the Bildungsroman of Julien Sorel, the intelligent and ambitious protagonist. He comes from a poor familyand fails to understand much about the ways of the world he sets out to conquer. He harbours many romantic illusions, but becomes mostly a pawn in the political machinations of the ruthless and influential people about him. The adventures of the hero satirize early 19th-century French society, especially the hypocrisy and materialism of the aristocracy and members of the Roman Catholic Church, foretelling the coming radical changes that will depose them from their leading role in French society.

The first volume’s epigraph is attributed to Danton: "La vérité, l’âpre vérité" (“The truth, the harsh truth”), but like most of the chapter epigraphs it is actually fictional. The first chapter of each volume repeats the title Le Rouge et le Noir and the Chronique de 1830 sub-title. The novel’s title refers to the contrasting uniforms of the Army and the Church. Early in the story, Julien Sorel realistically observes that under the Bourbon restoration it is impossible for a man of his plebeian social class to distinguish himself in the army (as he might have done under Napoleon), hence only a Church career offers social advancement and glory. 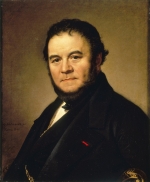